In 1965, when 600 marchers crossed Edmund Pettus Bridge in Selma, Alabama to fight for uncontested voting rights for black individuals, they were met by the fists and whips of white men; many black marchers were left on the bridge to die.

In 2015, just 50 years later, in the comfort of their theatre seats, moviegoers got to witness what happened on that bridge in the Oscar-nominated film for best picture, Selma.

Directed by black filmmaker, Ava DuVernay, moviegoers saw the fight, heard the cries, and felt the pain black people had to endure for their equality and freedom.

In one of the most powerful films to date, Selma shows the struggle that tormented black people in the south.

Beginning with the racially-motivated murder of four young girls at church, the stage is set for Martin Luther King Jr. (Mr. David Oyelowo) and the Southern Christian Leadership Conference (SCLC) to fight peacefully against white oppressors in the south.

Alongside King is his smart and beautiful wife, Coretta, played by actress Carmen Ejogo, who, only very briefly, yields in her support of her husband.

DuVernay’s decision not to omit King’s infidelity suspicions is distinct: King, like anyone else, is human.

Throughout the movie, the number of those walking alongside King grows, including those of different races and religions.

At one point, we even see the very vicious murder of a white priest from Boston, who had traveled to Selma in support of King and the SCLC. And we see the heartless killing of one young black boy, Jimmie Lee Jackson.

Though shot by local officers, at Jimmie Lee’s funeral, King addresses the community by admitting that every bystander’s finger was on that trigger, too—black or white, rich or poor.

Throughout Selma, each word King utters is powerful in its genuineness; and at some points, DuVernay interjects real footage from Selma in 1965—a chilling effect.

Like any good film, Selma has raised some eyebrows about the accuracy of its story line, particularly surrounding the role of President Lyndon B. Johnson.

Many point out that the movie portrays the relationship between LBJ and MLK to be overly contentious; when in reality, LBJ was a key proponent during the Civil Rights movement, who never wavered in his support of King.

The film has been criticized for that reason.

And many critics say that that’s the justification for why The Academy of Motion Picture Arts and Sciences (AMPAS) failed to nominate both Ms. DuVernay, for best director, and Mr. David Oyelowo, who played MLK, for best male actor.

A film about the brilliancy of one of America’s greatest leaders is allowed to blur the lines of some historical accuracy.

The film is about Martin Luther King Jr., about his goals, his losses and his triumphs; it’s not about the 36th president of the United States.

Had the Academy not snubbed Ms. DuVernay, she would have been the first black woman to be nominated for best director in the Academy’s 87 years.

And no black director has ever won the Oscar in its 87 years.

Though it may not have been deliberate, the Academy’s failure to nominate both Ms. DuVernay and Mr. Oyelowo for Selma brings up a much larger issue: the lacking number of awards for people of color.

With an overwhelming majority of the Academy’s voters being elder white men, it’s no surprise that Mr. Oyelowo was snubbed as well.

Coming out during a time when the equality of black lives in our country is being tested, Selma reminds us that a leader, like King, is needed more than ever.

END_OF_DOCUMENT_TOKEN_TO_BE_REPLACED

Sasha Frere-Jones’ move from The New Yorker to Genius is actually quite the opposite. That is, not genius, but nonsensical.

Last week, Jones publicly announced his decision to leave the well-respected, highly acclaimed, and beloved American magazine to become the executive editor of a company that will rewrite hip-hop lyrics in colloquial terms.

The company, Genius, was founded in 2009 by three Yale graduates with the collective idea of explaining hip-hop, or rap lyrics to the common person.

Astonishingly, Genius, originally known as Rap Genius, was able to fund $56.8 million in its first five years of business.

Its founders, and other executive team members, say that they’re confident the company will still be profitable in the next five years, unlike print and conventional journalism, which is apparently dying.

According to The Times, in the article that broke the news, Genius will expand to commenting on restaurant menus as well. And Shakespeare.

Genius founders told The Times, “The site will continue to hire people with expertise in particular subject areas, aiming to bring in more users from online communities obsessed with particular topics.”

On its website, Genius says, “have you ever been confused by a song’s lyrics? Had trouble understanding a line from Shakespeare or the Bible? Struggled to finish a boring article that seems important? With genius you never have to worry about this- or anything else- ever again.”

Think Sparknotes, but for music, and menus, and the Bible.

In an interview with The Times, Jones said that his work for Genius will involve the lyrics side of things, as well as working to evolve the company’s team.

Though the site is monitored by editors, anyone can comment; Genius prides itself on that.

It says on its website, “There is no single genius who writes all the annotations—anyone can contribute. Genius is powered by the community, and that’s what makes it special.”

Job security or not, Genius is not the platform for veteran critic, Sasha Frere-Jones.

Jones’ 11-year career as a staff writer for The New Yorker is ending all too soon; some of his past work includes reviews on Neil Diamond, Mariah Carey, Bon Iver and Prince, as well as Lil Wayne and Wu-Tang Clan.

In 2007, Jones published a piece in The New Yorker, “A Paler Shade of White,” which pushed mainstream journalism’s comfort zone for racial discourse; it discussed the transforming role of race in contemporary music, like indie rock and hip-hop over the last twenty years.

Jones’ fearlessness, and his love and appreciation for music, which was revealed through his brilliant prose, will be sorely missed in The New Yorker.

His work for Genius just won’t do his talent justice. 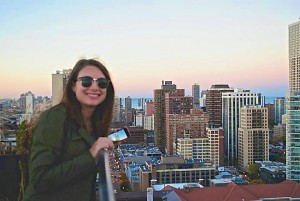